*please note this FreeSessions is the 2nd Sunday due to Labor Day weekend.

Larry ELLINGSON is a lifetime native of Spokane who composes music with analog and digital recording tools and creates additive sculpture from found objects (www.larryellingson.com).

He performs tonal and atonal music combining improvisational and structured composition, live looping, analog and virtual synthesis, signal processing, and random access of a personal sound collection. Using the same approach as his creation of visual art, his goal is to create layers of sound and music that are interesting enough to keep you listening.  Listeners often feel that they are moving through an unfamiliar or dreamlike landscape with with features and details appearing, lingering, then fading away.

GRAPHIC SCORES – A little background
Through the centuries composers and artists have collaborated.  One of the earliest examples I heard when I was younger was Modest Mussorgsky’s “Pictures at an Exhibition” where he interpreted images at a friend’s exhibition of paintings.  After WWII there was a renewed interest and many composers started using non-traditional notation to communicate ideas they felt could not be accomplished through conventional means.  This ranged from using some aspect of standard notation in non-traditional ways, to scores consisting entirely of abstract imagery.  It can be said of the more abstract works that if one gave a single score to 100 different musicians/creators, one would hear 100 different interpretations.  Composers in the genre include John Cage, Krzysztof Penderecki, Steve Reich and Brian Eno, to name a few.  It was interest in this kind of composition that resulted in a unique collaboration between two artists in Eastern Washington.

COLLABORATION: SCORE
Larry Ellingson shared in a unique collaboration with Timothy C Ely toward the end of 2018.  Ely, an internationally known creator of one-of-a-kind books, is an illustrator and master bookbinder.  He also plays electric guitar.  During a road trip together they decided to collaborate on graphic music project.  Ely would draw six graphic scores bound in to a one-of-a-kind book, like those for which he is known, and Ellingson would create music inspired by those graphic scores.  Today the resulting book and CD are part of the Lilly Library’s rare book collection at Indiana University.

Using both found and synthesized sound, Ellingson composed music that realized the visual compositions created by Ely.  Reflecting the nature of Ely’s drawing, the compositions are dense and intricate soundscapes.  Ann Marra, graphic designer and artist, then created a CD and booklet that captures the essence of the project.  The resulting package is the music, along with small images of the graphic scores that inspired it.

GRAPHIC LANGUAGE OF MUSIC
Ellingson says, I spent about three months of 2018 creating sonic realizations of Ely’s SCOREs, becoming familiar and fluent in the idea of visual illustration to organize and arrange his graphical/musical ideas.  This caused a significant transformation of the way I hear, create and “see” music.

Composing and arranging for this kind of ensemble is quite different from writing for traditional instruments.  When composing work for live performance, I’ve been confounded by my usual method of rigid standard musical notation colliding with the plasticity and non-static nature of the technology/medium I’m using to create the music.  Once I’ve researched and gathered the various sources of sound generation and determined the controlling technology, the process bogs down. I want to lay it all out conceptually so I can have an idea of how it will work together.  Standard notation doesn’t work well because so much of the performance is left to chance and improvisation.  Many musicians who compose and perform this way hold the whole thing in their mind, keeping all of those virtual plates in the air as they adjust and experiment.  My brain doesn’t work that way; I often end up with a lot of broken plates and never know how my plan will come together.

So how can I represent these ideas?  Graphically.  Starting from Tim’s “language” of lines, shapes, clouds, and more, I’ve developed my own symbols that I draw as I improvise the arrangement.  This has really set me free from my own limitations.  These scores come together intuitively and much more quickly.  Less time is spent floating in indecision and more time flying.

Interpreting a graphic score combines imagination and improvisation.  Interpreting as a group requires that each artist also listens carefully to what the others are doing while keeping an eye on the score.  Both silence, cacophony and anything in between are acceptable outcomes.

First, we need artists to create the scores.  So the facilitator will select 1 artist and 3 or 4 musicians for each ensemble.  In each ensemble the musicians might decide in advance how long the piece will be and who will interpret particular sections of the score, but it’s not required.  Once there’s some kind of agreement, let ‘er rip!

SCORE CD packages will be available for purchase at the FreeSessions event. 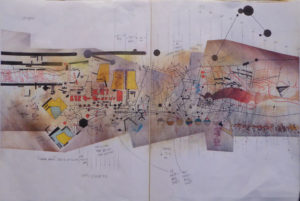 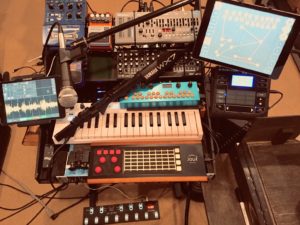