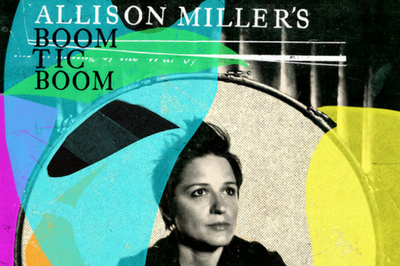 Supported in part by a grant from the Montana Arts Council, an agency of the State Government.

Lakebottom Sound Series is proud to present Allison Miller's Boom Tic Boom on October 21 at The Montana Theatre in partnership with the University of Montana Jazz Program.

“Ms. Miller is a drummer, bandleader and composer with an aesthetic of limber poise, drawn at once to brisk maneuvers and deep grooves.” –Nate Chinen, The New York Times

Hailed by Downbeat as one of the top 20 jazz drummers, Allison Miller marries her love of composition, drumming, and community in the form of her critically acclaimed band, Boom Tic Boom. Described as cinematic chamber jazz, this leading-edge sextet’s music—featuring Jenny Scheinman on violin, Dawn Clement on piano, Kirk Knuffke on cornet, Ben Goldberg on clarinet, Tony Scherr on bass, and Miller on drums- is at turns challenging and accessible, teasing and tough, virtuosic but never overbearing, and always grooving. Miller’s compositions reflect her diverse musical upbringing and versatile palette and she aims to, in true collective spirit, highlight each member of the band.

This year marks Boom Tic Boom’s 10 year anniversary and they will be celebrating with the release of their 5th album, Vine and Vein (Royal Potato Family.) The band has evolved over the years and has developed a truly unique sound. The current material is full of surprises and has been described as a celebratory genre-busting organic mash up of Bach, clave, klezmer, and the Jazz Messengers. Previous releases include Boom Tic Boom (2010), Live at Willisau (2012), No Morphine No Lilies (2013), and Otis was a Polar Bear (2016).

“Miller’s craftiness as a percussionist is met by her ingenuity as a composer and group conceptualist.” -The New Yorker

“Allison Miller’s BOOM TIC BOOM (is) strong and striking. Miller is deeply committed to her projects and has a band committed to following her there.” –Kurt Gottschalk – NYC Jazz Record