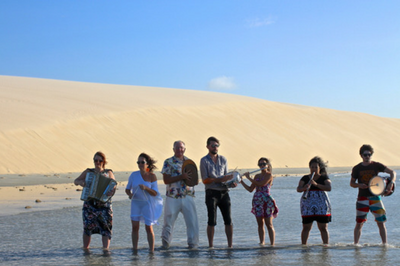 A multi-ethnic, female-led seven-piece, En Canto’s world pop music—a combination forró, samba, and choro-inspired originals and reimagined covers of classic Brazilian hits—commands attention and inspires movement. “We love this music because of its compositional brilliance, its original grooves, and its revolutionary nature ... its roots in post-colonialism, in cultural battles for class and racial equality,” Accordionist Jamie Maschler, explains. "Why wouldn’t it also inspire gender-equality?"

Playing primarily in North American venues, En Canto currently channels its fierce independence into challenging stereotypes while also helping audiences expand their comfort zones. “We make people dance,” as drummer Adam Kozie puts it “We routinely open our concerts to a room full of shy, awkward faces, and we close them to a sweat-drenched melee of bodies and smiles. We experience real joy when we play these songs, and people feel that, and they respond in kind, regardless of whether they understand the words or know the ‘right’ dance moves. It was the same for each us at one point when we first heard Luis Gonzaga or Gilberto Gil—we were provoked and then captured by the music, and we feel honored to be able to offer our own interpretations of it.”