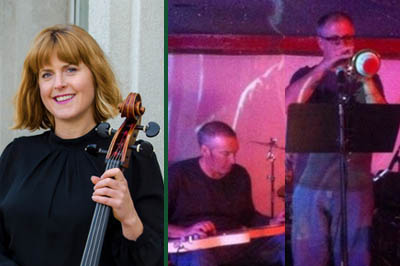 Jessica Catron is thrilled to be sharing two works for cello, both in the contemporary experimental sound medium. The first is an homage to a poet for looped cello and voice and the second is a wild and brash antiphony for solo cello, written by Alba Fernanda Triana, while attending graduate school together.
Read more about Jessica

While Scot Ray and Dan Clucas have played together in an eclectic array of groups over the years, the summer of 2017 will see their first forays as a duo with an inclination for collaboration with other improvising musicians. The initial spark was provided in Spring of 2016 when they met in Albuquerque New Mexico for live performance and recording of a quartet which consisted of the addition of Ray to The Mighty Bull Durhams, Clucas’ improvising trio with tubaist Mark Weaver and bassist Mike Balistreri.

Scot Ray is a lap steel slide guitarist presently experiencing an accidental second career of sorts, having retired in 2003 from his many years as a jazz trombonist working with Brian Setzer, Nels Cline, Vinny Golia, Tony Bennett, Jason Mraz - to name a few. Since that time he has applied his lifelong fascination with portamento and the non-fixed pitch to slide guitar. That obsession - plus reconnecting with past sonic collaborators such as Steuart Liebig, Bill Barrett, Mark Raynes, Dan Clucas, and Alex Cline - has propelled Ray into a couple dozen recording projects along with performances in Europe and the US. Current activities involve holding down the slide guitar chair in Steuart Liebig's newest project Mentot6, along with performing in duo with his pianist sister Vicki Ray - checkout their new release YAR on Orenda Records.
Read more about Scot

Dan Clucas began playing trumpet at age ten and started playing in school jazz groups a couple of years later, becoming a lifelong devotee of the music upon first hearing An Electrifying Evening With the Dizzy Gillespie Quintet at fifteen. Later forays into the music of Ornette Coleman, Cecil Taylor and the Art Ensemble of Chicago led to an appreciation of a diverse array of artists in the African-American music continuum. Clucas has studied with cornetist Bobby Bradford and trumpeter/composer Wadada Leo Smith, and has performed and recorded extensively with his own bands as well as in long-standing collaborative units such as Dead Air Trio, DO TELL and Brainchildren of Xenog. He has also performed and/or recorded with guitarists Nels Cline, Eugene Chadbourne and Joe Baiza, bassist Steuart Liebig, trombonist Michael Vlatkovich, hornist Tom Varner and saxophonist Vinny Golia.
Read more about Dan